We love it when a couple opts for a fun excursion to another part of town for additional footage… in this case, Piazza Del Campidoglio.

Rome always has and always will be the cradle of culture, art, and beauty.  Grab a van with your videographers and the photo team… turn right or left, up or down, and you will very quickly come upon a masterpiece for where your romantic wedding film continues.

There are no shortages of marvelous ancient wonders to stage a romantic post ceremony film session.  And of course, the result is TIMELESS.

~ That Speaks To Transformative Times 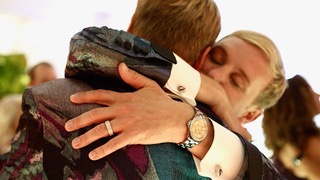 Supreme Court Ruling, Obergefell v. Hodges… legalizing LGBTQ marriage.  Bruce Bastian, the man behind the monumental Supreme Court Ruling which made same-sex marriages “THE LAW OF THE LAND” and tireless advocate for the HRC (Human Rights Campaign) never thought he would be able to marry the man of his dreams.  His now husband, Clint Ford, never even contemplated marriage while growing up because… it just wasn’t done.

To witness a wedding like this… and by the grace of God to be able to capture it in a film, leaves me forever moved and honored.  Not too many events in life change the paradigm of how we see love.  Go to video page!

The powerful speeches and emotional messages continue to speak to me eight months after filming.